This 45 was the same band we've blogged about before when they were previously known as Mickey Finn & The Blue Men. Following our recent theme of American releases of off the wall British records we give you this one on World Artists (also known for releasing Chad & Jeremy records, a few Reparta and The Delrons 45's AND  the U.S. only pressing by Steve Marriott's pre-Small Faces band The Moments doing "You Really Got Me").  For previous entries on the lads dig:

This was the band's fourth single (it's U.K. release was Columbia DB 7510). Both sides were produced by Shel Talmy.  Ian Whitcomb did "This Sporting Life" first, but regardless this version is far superior to his. I'm sorry but I could never take Ian Whitcomb and his whole "Hollywood Englishman" schtick very seriously. 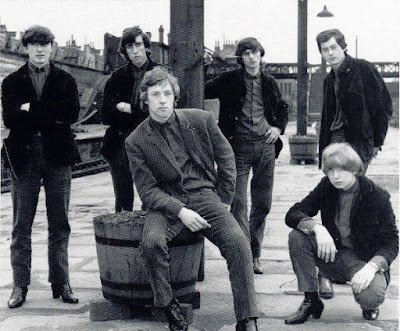 "This Sporting Life" is sort of a bluesy dirge, the vocals are soulful and there's some great Nicky Hopkin's style bar room piano topped off with some very Alan Price- Animals era styled organ playing!
The flip side is where the real gold is (to my ears anyway). "Night Comes Down" is a frantic slice of proto-freakbeat  that starts out with a cool descending/repetitive jazzy bass line and then the disjointed guitar kicks in till the whole thing is just a maddening exercise in insanity.  It reminds me a bit of John's Children's "Smashed Blocked" or The Small Face's "E To D (aka Running Wild)" with their possible drug induced paranoia and the lead singer repeating (frantically) "and it's tappin' on my brain, tappin' on my door, tappin' on my brain...". Killer stuff.

Both sides of the Blue Beat 45 have been legally reissued to the collection of their work "Garden Of My Mind: The Complete Recordings 1964-1967".