The Cherokees (not to be confused with an Australian 60's group by the same tag) had been around the U.K. music scene for quite awhile cutting  four singles for the EMI Columbia outlet.  One of which "Seven Daffodils"/"Are You Back In My World" even popped up on a U.S. MGM records compilation alongside The Animals, Herman's Hermits and The Moquettes (with their rocking version of "Right String Baby But The Wrong Yo Yo") called "British Go-Go" which I once owned for about five seconds after finding a single of the two Moquettes contributions (all four bands were produced by Mickie Most)!  Needless to say I can safely vouch that the band's releases were nothing to rave about, till this, their fifth and final single. 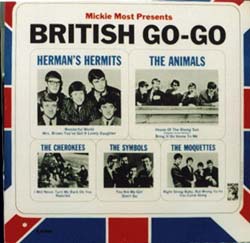 It was 1966 and The Cherokees finally got "with it".  But not on the A-side. "Land Of 1,000 Dances" is pretty mediocre, it's pretty much a lame version of The Cannibal & The Headhunter's original only sped up a bit, but too squeaky clean for my tastes. It's not soulful like The Action's brilliant reading or rocking like my favorite version by Sweden's Namelosers who bludgeon the god-damn song!  But the flip side is the stuff that legends are made of.  It's a total moody/moddy little piece with soulful vocals and a somber monotonous riff till the drummer and guitar player start going all Who on the track with some positively cool power pop breaks and everybody starts doing this half assed call and response thing (it worked for The Animals so maybe Mickie nudged them into it here), which is so lifeless it's actually cool, like they don't give a fuck or something!?!

At first I was thoroughly amazed that "Everybody's Needs" has not be reissued anywhere and hell the damned thing isn't even on YouTube which kinda makes me feel odd writing about it if I can't play it for you!
BUT I just found it's on a CD called "Singles" and there's a clip on Amazon for it (which is too brief to give it any justice but you can hear a bit of the crash band wallop modness that makes this song great) AND you can download the track individually if you're in the U.K.:

Email ThisBlogThis!Share to TwitterShare to FacebookShare to Pinterest
Labels: The Cherokkes