As chronicled in a previous entry:

The Eyes of Blue were a six piece soul/r&b act from Neath, Swansea, Wales.  This was their debut which hit the streets in the U.K. on November 16, 1966.  Their line-up was: Wyndham Rees (vocals), Gary Pickford-Hopkins (vocals), Ray Williams (guitar), Ritchie Francis (bass), Phil Ryan (keyboards) and John Weather (drums). 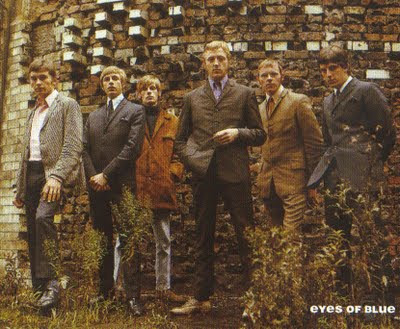 The A-side "Up And Down" is horrible.  God awful stuff, it's barely even recognizable from the band's other three amazingly soulful tracks on Deram.  The flip side is gold.  "Heart Trouble" is a cover of a track originally cut by George Clinton's amazing soul band The Parliaments (Golden World GW-46 in the States).  The Eyes of Blue speed it up just slightly, lose a verse and pump it up a notch.  Gary Pickford-Hopkin's chops are amazing.  This guy could belt it out with the best, and the backing vocals are perfect too, high, in key, in tune and very much like The Action's classy soulful backing voices.  The arrangement is tight and actually better produced than the original and certainly one of the clasic examples of Deram's homegrown blue eyed soul genre so beloved by mod anoraks (like myself) world wide.  And Deram mixing maestro Noel Walker does a great job in the production department on this one! 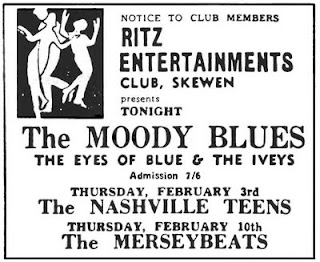 "Heart Trouble" was reissued on Decca/Deram's "Northern Soul Scene" CD and on "Fairytales Can Come True Volume Four".  No one has had the misfortune to utilize the A-side as filler on any CD comps, thankfully.

Email ThisBlogThis!Share to TwitterShare to FacebookShare to Pinterest
Labels: The Eyes of Blue Deram Soul

That's a seriously cool group picture showing them in their mod threads.

They all look mean and moody like they'd stab you in the guts and laugh out loud.

Great tune - I've got this on a comp somewhere, but can't think where

Love Heart trouble, prefer this one to the original too.

Yeah these guys look seriously hard. They remind me of the pics I've seen of these sort of hard mods at the Twisted Wheel in '67!