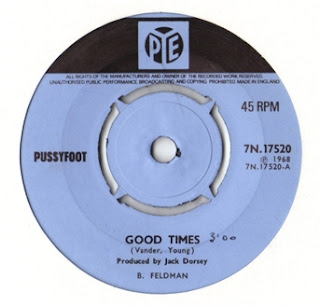 PUSSYFOOT-Good Times/Til You Don't Want Me Anymore U.K. Pye 7N.17520 1968
The curiously named late 60's British combo Pussyfoot cut this rocking version of The Easybeat's "Good Times" (which got a U.K. release on United Artists UP 2243 in September 1968) which preceded the original by a full six months (Amen Corner also cut a version on their debut LP "Around") !! This was their fourth and final U.K. single.  They were a 5 piece firm and you can read much more about them over at the ever groovy blogsite (a personal fave of mine):
http://sirhenryrawlinson.blogspot.com/
Pussyfoot's swipe at "Good Times" is actually a rocking number, now granted the original version has vocal help from Steve Marriott, but this version is cooking.  The lead vocalist is soulful and the tune is speed up considerably, the backing vocals for some reason remind me of the late 60's Kinks and there's some very cool bass playing going on there, especially cool when the key change abruptly occurs, not once but thrice like a DJ slowly cranking up the pitch.  The flip side "Til You Don't Want Me Anymore" is another classic 60's example of "hey we rocked it on the A-side now let's bring it down on the B-side and fill up space with a crap tune".  It's just lame soul-less M.O.R.!
"Good Times" was reissued on Sequel's "Doin' The Mod Volume 4: Ready Steady Stop".
Hear "Good Times":
http://youtu.be/7xcxhIjTYkA
By Wilthomer - June 22, 2011

Email ThisBlogThis!Share to TwitterShare to FacebookShare to Pinterest
Labels: Pussyfoot

Hi - just curious to know if the verb 'pussyfoot' is used over there in the US, or is it one of those odd words that didn't travel? It gets used quite a lot here informally to mean to avoid an issue, tread carefully -to 'pussyfoot' around something..(huge apologies if it's the same there but I just couldn't help wondering!)

It is indeed C, but like Homer Simpson and his giggling over "titmouse" my school yard mentality still causes me to snigger over this name each time I hear it.

Thanks! I'm the same - I've gone on about the insect called a 'cockchafer' in my last post... I felt a bit uncomfortable even just typing it!!