Stop Me If You've Heard This One:True Tales of Record Collecting Part One

Back in the mid to late 1990's I was forced to move back to the family homestead for a bit as I was rather heavily in credit card debt due to A.) one too many shopping trips to 99X for clothes, B.) one too orders to Craig Moerer's record mail order business and C.) living right across the street from Vintage Vinyl. True story ten grand later! 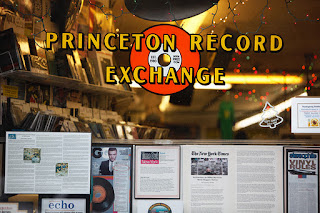 My record collecting pal Haim Kenig informed me that the Princeton Record Exchange had acquired a massive collection of 45's from the recently shut down Radio Free Europe (who knew the end of the Cold War and the fall of communism would be manna for record geeks?) and that they would be hitting the shelves.  I left work at lunchtime and met him there and we each took one end of the store and worked our way across the store till we were literally in the same box.  The next day I took the whole day off and and we met up first thing in the morning. We took lunch and dinner breaks at the nearby Athenian restaurant (R.I.P) and spent the entire time the store was open going through everything crouched over as all the boxes were on the floor beneath the LP bins (also R.I.P.) Ah to be young, I'd be in traction now if I did that for more than a few hours let alone two days!  Nearly all of the rare stuff had been snatched as it had been gone through by the people who worked there and a few dealers they knew before it hit the shelves.  I borrowed some $ from my dad with the intention of starting a "records for sale" little side gig and came home with probably enough to fill one of your standard white oblong cardboard 45 boxes.  Most if not all were German pressings of 60's stuff, well over half of it went on E-Bay a year or so later and the rest on my website/list  about 5-6 years ago.  The collection ran from basically the early 60's to the 80's, a lot of it was crap.  There seemed to be an ungodly large number of Joni James and Jack Jones 45's, I don't know if it unnerved the Commies but it'd sure get under my skin.  I did score some great stuff (The World of Oz, The Mirror, Chris Farlowe, Paul & Barry Ryan, The Rattles, The Small Faces etc) the picture sleeves were usually in bad shape with lots of stickers (see examples below) and shredded but the records were in great shape.  I'm not sure why because I'm quite certain Radio Free Europe wasn't giving Gene Latter, Screaming Lord Sutch, The Pretty Things or Twice As Much any heavy turntable rotation! 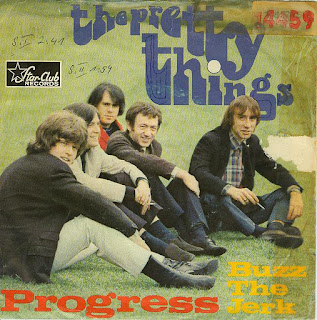 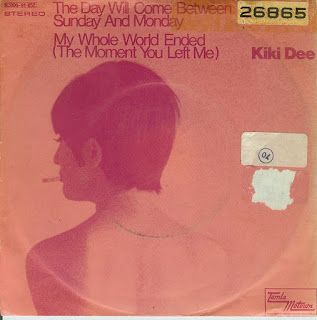 A week or two later I was back and a staff member at the store told me they'd found half a dozen more boxes that weren't out yet and that no one had gone through them from the store or otherwise and dutifully hauled them out and placed them in the corner.  I found a nice U.S. copy of the Dream Police "Living Is Easy" in  mint condition and there amongst the Shelia E 45's and Heino E.P.'s was the stuff that legends are made of...with it's center missing was Columbia DB7686 aka "On The Horizon"/"Crawdaddy Simone" by The Syndicats.  It was in VG++ condition, in a tattered green and white U.K. Columbia stock sleeve with a few stickers on the label.  It was $15!!  I was broke.  I no longer had a credit card and it was Thursday and my ATM was tapped (I got paid the next day).  I stashed it back where I'd found it and went out to a payphone and began calling my pals in the area.  Shaggy wasn't home, Kevin either.  I panicked.  I took the chance of asking the clerk who brought them out if he could hold a record for me and he hemmed and hawed and eventually said no that it wouldn't be fair or some bullshit.  I contemplated shoplifting it, surely the fine and shame and minor criminal record would be worth it right?  No.  So I stuck it in a Shelia E 45 sleeve and put it in another box and wrote down it's location on a scrap of paper in my wallet.  I went back the next day when I got paid and was there when they opened the store. It was gone.  I suspect my asking the clerk to hold it sent some signals and perhaps I was watched and they too sussed what I'd hid.  Maybe some Shelia E fan entered right after I left and stumbled upon it, I'll never know. The Dream Police 45 was still there though.

Great story. I still don't understand why that clerk wouldn't let you hold a $15 record for just a day, especially since you already spent some serious coin there already.

A loss that obviously haunts you til this very day!

There are a bunch of good record digging stores on http://www.dustandgrooves.com/

There were also some epic ones on the Soulsource forum a few years ago from Northern Soul hunts in the US.

I'll regale my favourite digging success for you.

Last year I was at this enormous annual neighbourhood garage sale here in Ottawa.

I hit up a record seller who had some 45s outside a church, but didn't find anything spectacular. A mediocre Nashville Teens single is all I remember.

My wife and I left, walking down a side street. She noticed a sale with a box of records, so I bolted over. Wasn't a large box, I saw some Muddy Waters live at a county jail lp, pulled that out.
Kept going, Bad Religion - Against the Grain still in the plastic, sure why not, early high school skate punk nostalgia.

Then near the back of the box I read something that makes my stomach drop: Fly Flying Ska, Prince Buster and the Skatalites. VG condition, on Soulsville Center.

I ask the owner what she wants for the records, jokingly saying "ooooh I dont know if I can let go of the Bad Religion", in my head I respond with "shit, I don't care, keep it.. just give me that PB record you foolish fool!!!".

I late found out that lp is one of Record Collector magazines top 75 rarest Ska / Reggae LPs of the 60s.

As a footnote, I continued on. An older friend of mine and his wife were turning over some of their vinyl. I grabbed The Uniques - Girls Like Dirt for cheap along with a 12' single of Captain Sensible's WOT. That one came with a story about how last time they had been in London they went for a pint with the Captain. Friends of theirs had been back up singers for him haha.

A similar thing happened to me about ten years ago. I was in a flea market for some odd reason, and I flipped through a dusty box of old 45s. In there was the "Sweet Music" 45 by The Koobas, complete with the Denmark-only flip "Woe Is Love My Dear" and a cool picture sleeve, for 10 Swedish kronor (about 1 British pound)! I had no money with me, so I started looking after my friend Rasmus who had got there with me, to ask if he could lend me the money. There was a lot of people there, but after a while I finally found him, and sure - he could lend me the money. I then walked back to the box of 45s to buy it, but then it was too late - someone had already bought it while I was away. At least I learned one thing - flea markets should not be underestimated.

Ouch! That Koobas 45 is sweet too, what a cool picture sleeve too!