David Bowie On Pye (Yet Again) 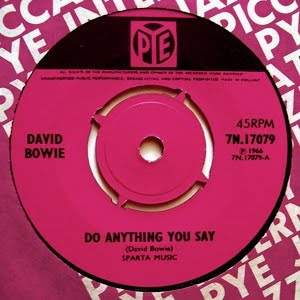 DAVID BOWIE-Do Anything You Say/Good Morning Girl U.K. Pye 7 N1079 1966
David Bowie's second single "as David Bowie" was released in April 1966 while he was being backed by a four piece band called The Buzz (not to be confused with the Joe Meek produced freakbeat act of the same name who were responsible for the monster "You're Holding Me Down" released at the same time as our disc in question).


The A-side, "Do Anything You Say", is a tune that is carried on the strength of some slightly off key guitar and piano (an alternate version exists with organ in the mix as well which sounds much better) banging away and call-and-response backing vocals from what one would assume were his backing band The Buzz.  The song is not without charm, but not one of his better 60's releases either and seems to get slagged off quite a bit.
The flipside is far superior in my book and sees a return to a more Flamingo Club r&b inspired flavor he'd explored on his second 45 which he cut with The Manish Boys the previous year ("I Pity The Fool"/"Take My Tip" Parlophone R5250 March 1965).  With it's uptempo beat, mild organ, jazz drumming and some nifty improvisational scat be-bop singing by Bowie during the guitar solo it's easily at home in that style of British r&b. The whole thing is swinging and reminds of Manfred Mann '66 when they really got cooking (with jazz) sans horns!  I think it's interestesting that Bowie chose to revisit the style he'd used earlier, which is most unusual for him to revert back to something he'd already done. 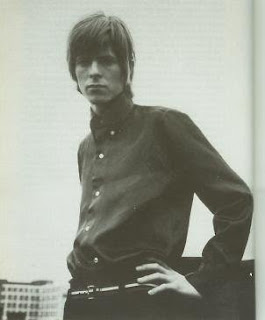 Both sides are contained in various compilations of 1966 Bowie material. Notably the 45/CD box set of all three Pye singles (A's and B's) "I Dig Everything:The 1966 Pye Singles" or it's predecessor from the late 80's (that's still floating around in used bins in all good record shops) "1966". The tracks can also be found on Rhino Records comprehensive pre-Deram Bowie 60's collection CD "Early On" which compiles all of his 1964-1966 material (plus some acetate demos).
By Wilthomer - November 05, 2010