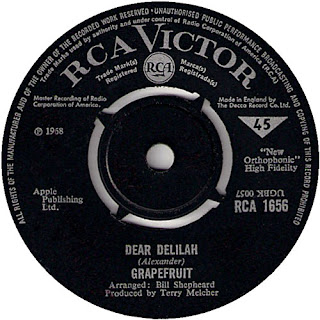 GRAPEFRUIT-Dear Delilah/Dead Boot U.K. RCA 1656 1968
We already gave the rundown on who Grapefruit were in a previous entry (Anorak Thing September 8, 2010) so we'll dispense with a history and get straight to this single at hand.
This was their debut 45 produced by Terry Melcher.  It's full of phased drums (ala "Itchycoo Park" and Caleb's "Baby Your Phrasing Is Bad"), a churchy organ intro, strings, woodwinds and catchy pop hooks.  The whole thing is nothing short of a pop psych masterpiece from it's arrangement to it's delivery, everything clicks.  What grabs me are the lyrics that reflect pure despair while the happy go lucky main chorus seems to dismiss it.  Here's some snippets of the symphony of sorrow:

"she wanted someone else that I couldn't be.."
"even with the crowd I'm on my own..."
"was I too fast, too slow or did the weather change ?"
My old Mod Fun pal Bob Strete drew my attention that that last quote, brilliant ain't it?  Melancholy orchestrated pop sike at it's best! The strangely titled "Dead Boot" on the flip sounds almost like another band.  It still has the band's trademark magic harmonies but it's just a completely god awful song. 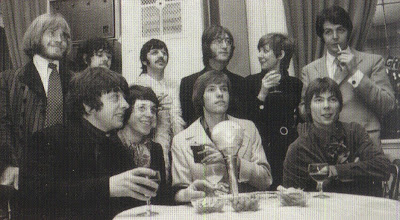 With heavy friends: Grapefruit launch party.  The band w/ Brian Jones, Donovan, Cilla Black and 3/4's of The Beatles, Saville Row January 1968
﻿
Both sides are contained on the Repertoire CD reissue of their highly recommended debut LP "Around..". 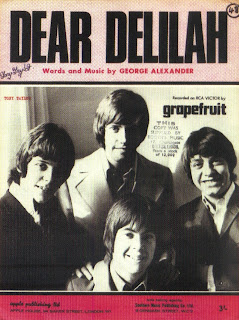 Cool. Dear Delilah has some great lyrics. I also read that the singer in Grapefruit is yet another brother of Malcolm and Angus Young along with one of The EasyBeats.