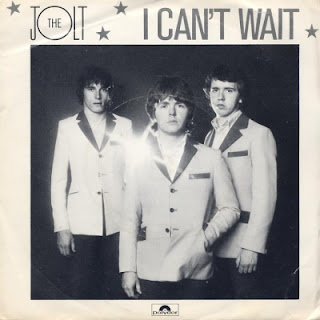 The Jolt were often touted as "Glasgow's Jam".  And why not?  They were a spunky/power-punky three piece on Polydor (the same as the Jam), they wore matching suits, were "mod"/60's influenced, produced by the Jam's first producer Chris Parry AND their second producer Vic Smith (later to become Vic Coppersmith-Heaven).  The difference?  The Jolt did not have a Paul Weller figure to write two and a half minute angst ridden 45 rpm barrages and the U.K. was ready for two 3 pieces "J" bands on Polydor in suits embracing the 60's.

That said The Jolt (Robbie Collins-vocals/guitar, Jim Doaks-bass and Ian Shedden-drums) released some pretty good records. Their debut 45 ("All I Can Do"/"You're Cold") was more akin to early Buzzcocks than The Jam in my estimation. This was their third 45 (the second one being an amphetamine fueled swipe at "Whatcha Gonna do About It" ).  "I Can't Wait" is a great slice of teenage power pop with a stiff driving beat, slashing guitars and throby bass.  Vocally Robbie Collins reminded me a lot of 999's Nick Cash and this number is proof enough for me.  The flip is a 100 mph speed freak version of the standard "Route 66", slightly uninspired but not bad either.

Shortly after this single the band added a fourth member and at the height of the '79 mod "revival" issued an E.P. in June called "Maybe Tonight" that featured a then unreleased Paul Weller composition called "See Saw". The band broke up soon thereafter with drummer Ian Sheddon joining the mod band The Small Hours (who he'd been gigging with) full time.

Both tracks are available on the CD reissue of their sole LP on the Captain Mod label which also adds all of their other non-LP tracks.

Great choice. I've been thinking about blogging this 45 since the summer but never got around to it.