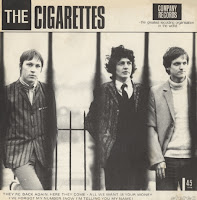 1. The Cigarettes-"They're Back Again, Here They Come"
A spunky classic '79 mod number from one of the lesser known bands of the era.  Far more punk rock in it's delivery with Johnny Rotten aping lead vocals. The message about the rise of xenophobic fascists still resonates today as we're surrounded by xenophobic racists. From "This is Mod Volume One".

2. The Greenhornes-"Saying Goodbye"
I'm rarely impressed by anything that has been recorded in the past 20 years so when my pal Bob Woj hipped me to this I was blown away at how "mod" it sounded and completely alien to anything else I'd ever heard by these guys before.  Downloaded from iTunes.

3. The Boomtown Rats-"I Never Loved Eva Brown"
Cheeky and almost like something out of the "Rocky Horror Picture Show" Modest Bob (or is it Sir Bob?) and Co.'s campy "rock opera" about Adolf and Eva never fails to amuse with it's hysterical lyrics and brilliantly intricate musical delivery. From their "Tonic For the Troops" LP/CD. 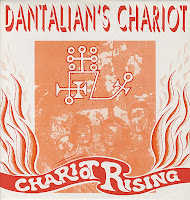 4. Dantalian's Chariot-"Recapture The Thrill"
One of the "lost tracks" from Zoot Money and Andy Summer's psychedelic/post r&b combo.  Simple, acoustic and mellow without any of the freak out/mind numbing factors involved in their sole single "Madman Running Through The Fields". From their now out of print LP excellent "Chariot Rising", but I found all the tracks on YouTube!!

5. Marvin Gaye-"No Good Without You Baby"
For 25+ years I've always wanted to hear where The Birds (and everyone who covered their version) got this number from and my friend Chaz came through recently with a CD-R of two of Marvin's 60's LP's and obliged.  Though not as powerful as The Birds cover, the original is still a classic slice of mod friendly Motown, amazing! 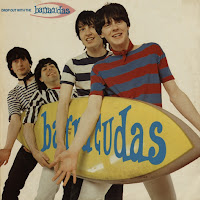 6. The Barracudas-"Summer Fun"
No matter what time of the year it is if I'm playing this number I can't help but think of the last day of tenth grade and hitting the beach with a gang of friends as this number blasted from a boom box (well they weren't "boom boxes" then, more like a portable cassette player w/ one speaker).  Infectious stuff. From their LP?CD "Drop Out With The Barracudas".

7. Joe Jackson-"Don't Ask Me"
Back when I was 15 I thought Joe Jackson ranked right up there with The Jam and the Specials or Secret Affair.  And why not?  Skinny ties, vintage suits, short hair and rocking songs with one of New Wave's greatest bass players in the form of one Graham Maby. "Don't Ask Me" was the b-side to the equally cool 1979 45 "One More Time" and is driven by Maby's typically cool, speedy bass line and some mean harp blowing by J.J. before he lost the plot with "Jumpin' Jive".

8. Christopher Colt-"Virgin Sunrise"
From one of the latter Bam Caruso "Rubble" volumes ("Rubble Volume 17: A Trip In A Painted World" to be precise) comes this Eastern flavored 1968 Decca 7" ditty with raga style guitars, Middle Eastern style guitar melodies and a vocal melody reminiscent of a Muslim muezzin's prayer call (one day "Anorak Thing" is going to explore who started this trend in British 60's psych records).  Perfect Autumn music:

"I feel the breath of the morning, tops of the trees are warm with the sun, everything round me is waking chimney's breathing the day has begun, turn down the road on a carpet of leaves hands in pockets and breath like smoke, noise of the living is waking around me like a day in the past when the world awoke....." 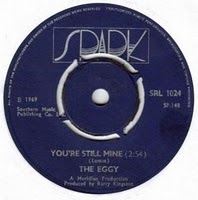 9. The Eggy-"You're Still Mine"
This freaky little gem from 1969 was unearthed by the Bam Caruso guys who had reinvented themselves as "Strange Things Are Happening" and issued their "Circus Days Vol. One" LP/CD compilation with this number that provides a detail of split second when freakbeat and bovver boy/glam collided.

10. Syd Barrett-"Wouldn't You Miss Me"
The highlight of the "Opel" LP/CD of lost Syd Barrett cuts, this version is far superior to the previously released "Dark Globe" in my book.  Classic, simplistic solo Syd.
By Wilthomer - November 29, 2010