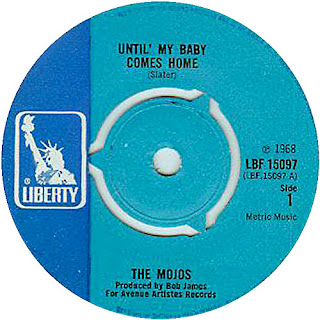 The Mojos were just another Liverpool band who by some miracle hung on by the skin of their teeth enduring personnel changes and retaining a record contract with Decca for four years before finding themselves out in the cold at the close of 1967. It is often stated in various places that the band broke up in '67, but as you can see by this label scan that was not entirely correct. By some grace and providence their got a one off deal with Liberty which resulted in this single which came out in June 1968.

"Until My Baby Comes Home" bears no resemblance whatsoever to the beat group who scored a minor hit with "Everything's Al' Right" in March 1964 (Decca F 11853), probably because it was four years later and The Mojos FINALLY got "with it", unlike their last Decca releases.  It opens with a melodic yet blistering guitar and some funky bass and electronic piano noodling.  The lead vocalist is purely Steve Marriott influenced.  The flipside, "Seven Park Avenue" is equally cool, repeating the same type of electric piano driven number with less freakbeat guitars with the lyrics concerning a boarder in a rooming house falling in love with his landlady.  The bass and electric piano interplay provides a good groove on this one that reminds me of The Zombies when they really got cooking/swinging on say, "It's Alright With Me" or "Indication". 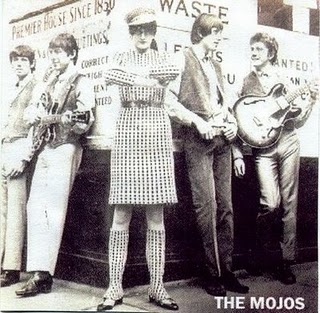 Strangely only "Until My Baby Comes Home" has seen a reissue and that was on Psychic Circle's "Mix A Fix:U.K. Floor Fillers Volume Two" CD a few years back, which I find odd that such a brilliant track would stay relatively unknown for so long.

ADDENDUM:
Both sides appeared on the 2009 RPM CD Mojos singles retrospective "Everything's Alright". AND "Until My Baby Comes Home" is on the 2012 RPM 3 CD set "Looking Back".
Reader and original Mojo on this record Anthony House contacted us and wrote:
"Hi ,
Just to put the record straight . The line up of the Mojos in 1968 was , Stu James ( vocals , piano , guitar ) Duncan Campbell ( vocals , bass ) Eddie Harnett (vocals , guitar ) Tony House ( drums ) . This was the line up that recorded the Mojos Liberty release in 1968 at Bob Potter Studios in Camberley , Surrey UK.

Tony House"
MANY thanks Mr. House!!!

Hear "Till My Baby Comes Home":