Hermans Had His Course... 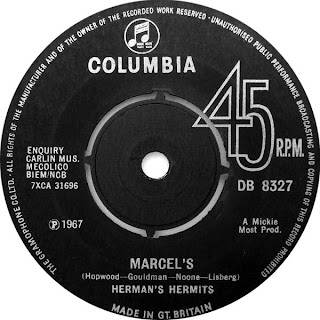 Herman's Hermits first single of 1968, "I Can Take Or Leave Your Loving" was a number that was simultaneously issued by our heroes, The Foundations (see Anorak Thing December 19, 2009) as a B-side to their "Back On My Feet Again" single.  The single was the band's last U.S. Top 40 hit (#22) and clocked in at # 11 in the U.K. (where they still had four more Top Ten 45's up their sleeve).  It's not bad, there's some pretty cool stuff going on in it thanks to Mickie Most's inclusion of everything that added up to "hit".  It's a soulful song, but "soul" and Herman and Co. do not go hand in hand but they give a  good show of it anyway and it's got a great melody and some cool Four Seasons style chord changes.  The flipside is far more interesting, in fact as a kid I scored a U.S. pressing of this 45 on MGM and played the flipside incessantly(both sides were the same as the U.K. release).  It's a group original (with help from fellow Mancunian Graham Gouldman and their manager Harvey Lisberg) that's sort of a bizarre pop song about some cat named Marcel who has a houseboat on the Thames where all the freaks can be found.  Groovy baby. It's campy and was probably an ill advised attempt at getting lyrically "with it" for the times, but hey it's a halfway decent number, in fact it's still one of my favorite tunes by the band.  I'll bet you whoever owns the rights to the band name these days isn't playing this odd duck of a track at the County Fair or casino! 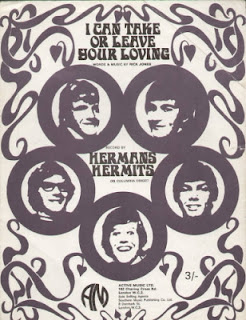