In Defence Of The Mods From Merton Park...... 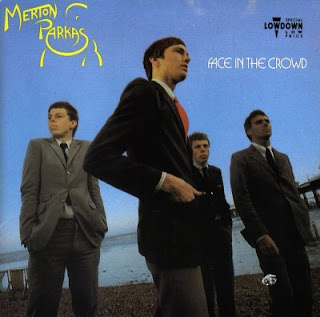 The Merton Parkas.  Three words that are sure to start sniggering and guffawing in a room full of old mods, like mentioning The Mighty Bosstones around some real skinheads.

The Merton Parkas were slagged off back then ('79) by their peers.  I'm not quite sure why.  Sure "You Need Wheels" is a pretty dreadful record but beyond that I think the band's material is a pretty nice alternative to all the Jam aping "punks in parkas" bands of '79.  Brett "Buddy" Ascott of The Chords observed:

" I don't blame the Merton Parkas, I blame the people who bought it.  I mean come on-'You Need Wheels', that was really our 'Anarchy In The UK'?" ( from "Mod: A Very British Phenomenon" by Terry Rawlings)

I liked the mix of Fender Rhodes (and Hammond towards the end) on their stuff and the up tempo blokey feel of their music, like a sort of mod frat party band.  I thought they looked cool as *uck on the cover of their LP on Brighton beach in their suits, hell they even turned me onto the concept of wearing red socks!

For me The Merton Parkas are a magical slice of my "defining moments of mod".  For Xmas 1981 I got their 1st LP.  The three guys I hung out with weren't mods, two were punks, the other did his own thing but they all sort of embraced the mod thing for one shining moment. We all had narrow ties and solid color shirts and parkas with obligatory badges (well only one guy had a parka the other two had US Army field jackets and I had some dark olive green cotton twill thing that looked like a cross between a pea coat and a field jacket, coated in WAY too many badges and patches).  We all trooped down to our friend's house (always our meeting place because his parents never seemed to mind us hanging around playing music till all hours) and his mom took us all to see "Ghost Story" the night after Xmas and we all got kitted out (another chum even wore his grandad's old vinyl black porkpie).  He and I had both gotten black suits for Xmas, granted they were two button but hey we were 15 what did we know?!  Our "host" had just gotten the Lambrettas "Beat Boys In The Jet Age" LP for Xmas and he made a cassette tape of tracks from it along with stuff from my Merton Parkas LP, Secret Affair's "Glory Boys", The Special's 1st LP, stuff from "Absolutely" by Madness and the "Odds Bods Mods & Sods" compilation LP (a big fave with my punk rock inclined crowd).  After coming back from the movies for some odd reason we took his boom box out to the curb and danced in the street beneath a streetlight.  No booze, no drugs, no chicks, just 4 morons in their early teens bouncing around without a care in the world.  And when I hear The Merton Parka's version of  "Tears Of A Clown" or "When Will it Be" I'm a 14 year old on that corner, under that street light, jumping around like a fool with my friends (two of whom are now all no longer with us).

Email ThisBlogThis!Share to TwitterShare to FacebookShare to Pinterest
Labels: The Merton Parkas Mods