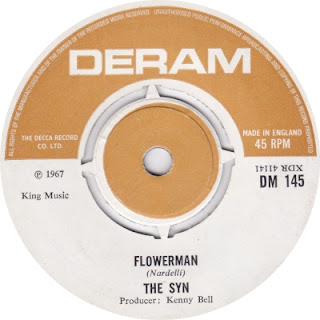 The Syn were a five piece who garnered quite a bit of notice with stints at the Marquee club.  You can hardly see an advert for the club in '67 without failing to notice a Syn gig listed.  The book "London Live" by  Tony Bacon chronicles the number of Marquee appearances by band and The Syn according to it, played there a 36 staggering times (even The who with their "Maximum R&B" residency only managed 29 gigs there)!  Like most of their peers The Syn embraced "flower power" head on.  Both sides of this single make it quite clear which side they're on. 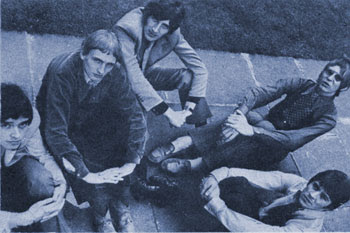 This was The Syn's second and final single and it was released in September 1967.  Both sides were group originals. The line-up for the single was: Steve Nardelli (vocals), Peter Banks (guitar/vocals), Chris Squire (bass/vocals), Andrew Jackman (keyboards/vocals) and Gunnar Hakonarson (drums).

"Flowerman" grew (nyuck!) out of a band stage favorite originally titled "Flowerman Opera" (the band were found of using the word "Opera" as they'd also had another cut they did live called "Gangster Opera").  Like The Attack's "Neville Thumbcatch" (Decca F 12725 January 1968) it's subject professes a love of all things green and flowery.  Not so much your peace and love type number but a Kinks style romp about a fella who "make(s) a living yes by giving attention to rhododendrons".  All good fun!  "14 Hour Technicolour Dream" commemorates the famous Alexandra Palace "happening" of  April, 29, 1967 that saw The Syn play amongst a host of other acts of the "class of '67".  The track is one of The Syn's best in my estimation, putting to use their array of vocal talents for some tight harmonies, piercing guitar bursts and strong vocals by Nardelli who sings about the event (name checking super groupie Suzi Creamcheese in the process).

Both sides have been reissued on The Syn "box set" "Original Syn". "14 Hour Technicolour Dream" has appeared on both Decca/Deram's "The Psychedelic Scene" and Rhino's essential box set "Original Artyfacts From The British Empire And Beyond 1964-1969".  "Flowerman" has not, to my knowledge been reissued on CD anywhere else. 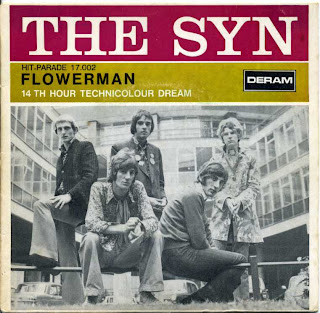 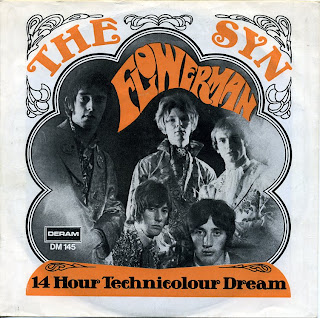 Email ThisBlogThis!Share to TwitterShare to FacebookShare to Pinterest
Labels: The Syn Deram