This was the eighth U.K. (and next to last) single by a six piece known collectively as Simon Dupree and The Big Sound who straddled both soulful good-time r&b alongside psych pop. There was no Simon Dupree, the band were the brainchild of the three Shulman brothers, Derek (vocals), Phil (saxophone/trumpet/French horn/vocals) and Ray (guitar/vocals).  Along for the ride were Peter O'Flaherty (bass), Eric Hines (keyboards) and Tony Ransley (drums).

"Broken Hearted Pirates" is a ridiculous piece of pop with lyrics befitting a Gilbert and Sullivan musical and certainly would've been right up Adam and The Ants alley in 1981! It's disposable but thanks to the excellent instrumentation and Derek Shulman's enthusiastic lead vocals  it actually works despite technically being a pretty dreadful track!  And that's Dudley Mooore guesting on piano on the track for trivia buffs. The real gold is found on the B-side, "She Gave Me The Sun". Starting out with some barrelhouse piano and thundering drums it busts into a completely danceable soulful groove punctuated by some killer horns led along by congas, twinkling organ, catchy bass.  It's easily my favorite track by the band hands down. The record failed to chart and they released just one more single ("The Eagle Flies Tonight" b/w the funky "Give It All Back Parlophone R 5816) in November 1969 before the Shulman brothers disbanded the group and formed prog heroes Gentle Giant. 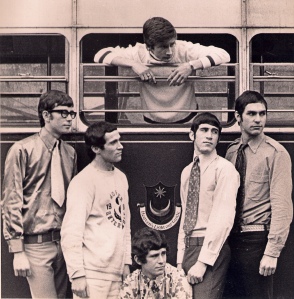 Both sides are available on two recommended collections of their work "Part Of My Past" (which is a double CD compliling all of their singles,their entire LP and loads of unreleased material) and the slimmer but equally essential single CD compilation "Kites".

Hear "She Gave Me The Sun":

Email ThisBlogThis!Share to TwitterShare to FacebookShare to Pinterest
Labels: Simon Dupree And The Big Sound