Long before Procul Harum four gents called The Paramounts (Gray Broker-Vocals/keyboards, Robin Trower-guitar, Diz Derrick-bass and B.J. Wilson drums) cut 6 singles and a 7" E.P. for the Parlophone label from 1963-1965 with little recognition despite being mentioned by The Rolling Stones as "Britain's best r&b band". Produced by Ron Richards (who also produced The Hollies) the band generated a great deal of publicity on their repertoire but were always a "musician's band" and sadly never gained any heavy duty chart action (though their debut , a cover of "Poisin ivy" did scrape the lower wrungs of the Top 40).

This was their third single, released in June 1964.  The topside was a cover of the Impression's "I'm The One Who Loves You". Interestingly Broker botches the lyrics in two different places but that does not detract from the fact that the band actually succeed in making the number their own by beefing it up with some nice Ray Charles styled electric piano and soulful vocals all around. The band often plundered legendary mod DJ Guy Steven's record collection for tracks to cover and seeing as no one else in the U.K. covered this 1963 track it's safe to say it probably came from him.  The flip sees the band's very first original, a Brooker/Trower number called "It Won't Be Long".  It's not terribly exciting, but not unlistenable either.  It's a mid tempo r&b type number with call and response vocals that could easily be mistaken for an obscure King 45 rpm side. 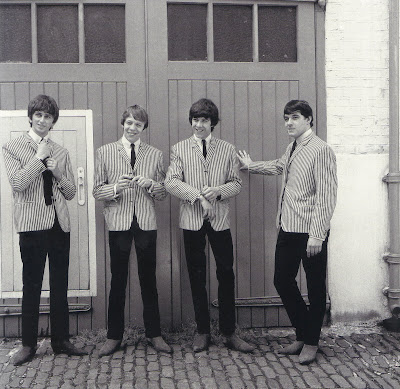 Both sides are available on the highly recommended Edsel LP/CD "Whiter Shades Of R&B" which compiles all of their 45 and E.P. tracks as well as some unreleased numbers and a rare French E.P. only cut.

Email ThisBlogThis!Share to TwitterShare to FacebookShare to Pinterest
Labels: The Paramounts Procol Harum

"I'm The One That Loves You" is a great Curtis Mayfield song. It was also covered by Gene Chandler, which was produced by Curtis Mayfield, I believe.

Also, The Paramounts have a couple of songs in the Oil City Confidential Soundtrack CD, including Poison Ivy.

They do look terribly awkward in this photo, though, don't they..?!

Ah but they do sound preferable to most Procul Harum....my other half used to babysit for Robin Trower in the early seventies when he was supposed to be a white Hendrix - apparently always picked her up in an e-type, very rock star ! Saw him a few years ago and he was dire....I so wish he didn't pull those awful faces when playing solos....I think I prefer him awkward !