As we've covered John's children in multiple entries here already we needed go into too much detail who there were etc. By the time of this single's release (October 1967) lead guitarist Marc Bolan had bugged out and the band were on shaky legs. Both of these tracks were scraped up from previous sessions and released.  "Go Go Girl" was composed by Marc Bolan (the band also cut a version titled "Mustang Ford" essentially the same track with different lyrics).  The flip side, "Jagged Time Lapse" dates from the John's Children Mk. I era when Geoff McClelland was their lead guitarist (he co-wrote the track with bassist John Hewlett), a version with McClelland appears on their U.S. only White Whale LP "Orgsam" (with a cool "Understanding" rip off intro).  Bolan plays guitar on both tracks, as evidenced by his sloppy/choppy style. 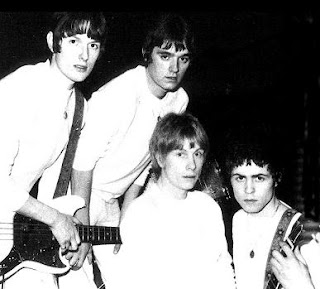 "Go Go Girl" still stands the test of time after all these years and still sounds as fresh to me as it did when I first heard it oin 1985 on a bootleg LP called "The Smashed Blocked World Of John's Children". It's catchy and the cheezy organ solo (played by manager Simon Napier Bell) is groovy and very distinctly lyrically Marc Bolan in the vocal phrasing.  "Jagged Time Lapse" has always been one of my favorite tunes by the band, it's general feel gives the impression of a confused, drugggy come down (speed or acid?) with lyrics that seem to be more mentally ill hallucinations than druggy psychedelic visions!  The track is highlighted by Chris Towson's cymbal bashing and Bolan's plodding guitar strumming beneath a fluid bassline by John Hewlett, not bad for a bunch of guys that Napier Bell claimed couldn't play!  (Actually a Bolan era bootleg EP of their BBC session shows them playing well, though Bolan did not know how to tune his guitar and Any Ellison is singing in the wrong key...). 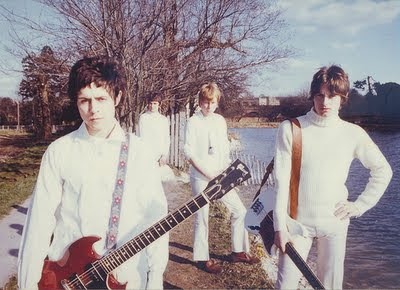 Both tracks are available on a variety of John's children CD compilations("The Complete John's Children" and "Smashed Blocked"), which are all sadly, out of print.