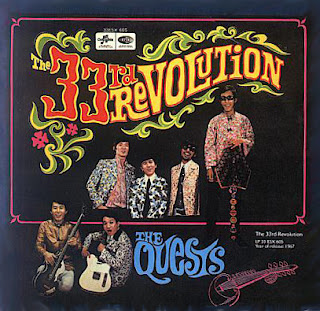 1.THE QUESTS-"Never Ever"
The Quests were a 60's band from Singapore who not only covered Tomorrow's "Mr. Rainbow" (as it was known in a version by Steve Flynn, Tomorrow titled it "Hallucinations") and got to #1 in Hong Kong with it but tackled one of my favorite Action tracks "Never Ever" on the same LP "33rd Revolution".  They actually do a very excellent job speeding/rocking it up a bit!

2. THE FLYING BURRITO BROTHERS-"Wild Horses"
Joining the ranks of Nick Drake, The Monks, Love, Scott Walker and The 13th Floor Elevators comes Gram Parsons and Co. This is a list of artists I've been driven to avoid for many years because I've been force fed them by friends who bludgeoned me to death with near religious devotion causing me to run the opposite way but eventually come around on my own, in my own good time about them.  Well that happened for this bunch a few weeks ago and this track blows me away and kicks the crap out of The Stones version in my book.

3. PAUL REVERE & THE RAIDERS-"Why Why Why"
More times than often I am usually ignorant of U.S. 60's music, so for a great many years I was only familiar with the Australian version of this track by The Dave Miller Set.  Eventually I came around to it's somber original, which blew me away!

4. THE DUKES OF STRATOSPHEAR-"What In The World?"
Test driven and battle proven via lysergic music research conducted by the enlightened and the experienced in a controlled environment this track and this band withstood the acid test, literally, up against more "serious" contemporaries who weren't playing dress up and pretending it was 1967 but 25 + years on who got it right? The blank generation refugees in paisley shirts and vintage Vox gear or four English new wave castaways with a brilliant plan?  I think the latter.

5. KALEIDOSCOPE-"Faintly Blowing"
One of my favorite 60's British psychedelic records is this trippy number, nothing but bass, guitar, drums and vocals with lots of wobbly thrown on the jangly/shimmering guitars to pre-date Biff Bang Pow and their dischorant freakiness (the band) by 17 years. "See the children thrust their tiny hands onto the sun..."

6. JOHN COOPER CLARK-"Evidently Chickentown"
This blog is about honesty, so I'll own up to not being clued in on J.C.C. at all. I've seen this cats picture since 1980 and had no clue what he was about and finally, in July 2011, I investigated him after figuring out this wiggy track that closed a prolific scene on "The Sopranos" way back when was the "backcombed bard of Salford", "bloody" good!

7. PAUL WELLER-"Find The Torch Burn The Plans"
Anybody who reads this blog often enough will know that though I respect the fuck out of the "Modfather" I'm also an egotistical bastard who thinks I'm cooler than him because I've never dabbled in house, casual, garage (the UK hip hop style not the 60's beatle boot wearing sort) AND I've never been seen with highlights in my barnet and wearing a god damn Pretty Green wifebeater!  With that rant said after half a dozen mediocre albums by the man  I've gotta say I am dead impressed by a few segments of "Wake Up The Nation" and none better than this one a wiggy amalgamation of "Heroes"/"Low" era Bowie meets psychedelia! I'd love to give him another shot live but I know attending one of his New York gigs will just be a bunch of drunk bald ex-pats acting like they're on holiday in Paceville (Google it) shouting out the lyrics like they're doing personal karaoke or cheering whatever team they follow.

8. THE WALKER BROTHERS-"Orpheus"
A predecessor to Scott Walker's solo career (the melody even slightly resembles "Plastic Palace People") this brilliant melodrama is almost a sequel to the earlier kitchen sink opus "Mrs. Murphy" and spares none of the tour de force orchestration and distinct phrasing that you'd expect for pre-Scott solo era Walker Brothers material.

9. ERIC BURDON & THE ANIMALS-"Gratefully Dead"
For some insane reason this killer 1967 U.K./Euro flip of "San Franciscan Nights" was never released in the U.S., maybe MGM (their U.S. label) was worried about offended the lame S.F. band of that name?  Anyway it's criminal because the track blows my mind with it's overtly Hendrix influenced groove and Burdon's usual Geordie acid high priest lyrics.

10. ROY CLARK-"Do You Believe This Town"
A brilliant bit of social commentary slagging small town, small minded, hypocritical and yes, even racist ways (dig the last verse), the latter being something you'd NEVER hear addressed in country music vintage 1968! Thanks to my dad for playing this record to death and ingraining it in my tiny mind, and it's still there.

What an interesting selection, and your (honest!) mixture adds to the appeal, I smiled when I saw JCC's name in there! First heard him when I was that young punk, on 'Short Circuit - Live at the Electric Circus' alongside the Buzzcocks, Fall, Joy Division, etc. He was, and is, such a one-off, and has something tremendously endearing about him. Apparently he moved south-eastwards and is often to be seen near where I live, looking just the same - I've yet to spot him, but shouldn't have too much trouble recognising him if I do!

I have to listen to the Quests one - off to youtube...

Bill, an excellent list. I love the range of artists from the Dukes to Roy Clark. A couple of questions:

1. Speaking of '60s country, what's your take on Buck Owens? I think he was pretty cool. I would also recommend a CD that came out a few years ago by the Gosdin Borthers called the Sounds of Goodbye.

2. Also, speaking of Scott Walker & Paul Weller, don't you think that "No Tears to Cry" sounded a lot like the former?