More Who Covers: The Untamed

The Untamed had been slogging around the U.K. r&b scene for several years and had been on three different labels (chronologically: Decca, Parlophone and Stateside).  The band revolved around lead singer/guitarist Lindsay Muir and a constantly changing line-up.  The one consistent staple besides Muir was producer Shel Talmy, who stuck with them through all five of the band's singles and took them to his newly launched Planet label.

December 1965 saw the new Untamed product on Talmy's Planet imprint, a cover of The Who's "It's Not True" from their October 1965 "My Generation" LP (U.K. Brunswick 05944). The Untamed version is nearly doubled in speed and Lindsey Muir uses none of Roger Daltrey's venomous sneer of the original and plays it safe singing in his own way aided by a chorus of double tracking. Iiterestingly session man Nicky Hopkins (who played on the "My Generation" album) plays piano.  The whole number is frantic, disciplined, but frantic with some slashing guitar during the middle break, and the whole thing works!  "Gimme Gimme Some Shade" is a Lindsay Muir original.  It's mid tempo with some bluesy licks and the double timed piano/backing similar to the A-side with Muir's jazzy vocals. The single went nowhere and Muir once again retooled the line-up changing their name to Lindsay Muir's Untamed and cutting one last single for Planet, which is another post for another day.

Both sides are on the excellent, but sadly out of print RPM CD collection of The Untamed's work "Gimme Gimme: Singles And Unreleased Rarities 1965-1966" which I cannot recommend strongly enough. 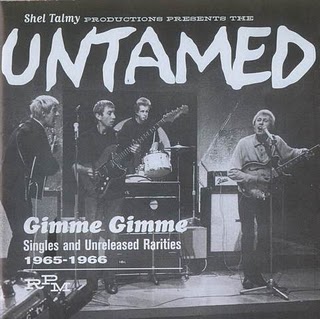 Hear "It's Not True" and "Gimme Gimme Some Shade":

In 1999, Circle Records released an Untamed album "It's all true" on vinyl and cd. This includes a BBC Saturday Club Session Recording 1/1/66 of "It's not true" but not the flip. Pretty sure this is still in print, or if not, shouldn't be too difficult to track down.