The Beatstalkers were a 5 piece Scottish band from Glasgow who were managed by one Kenneth Pitt who also happened to manage an artist named David Bowie.  The Beatstalkers never gained national attention despite some decent records and being hot property on their home turf. Today's subject was the 5th of their 7 singles, hitting the streets in time for Christmas 1967.  Sharing Pitt as a manager the band became acquainted with David Bowie and would soon become the recipient of the some of his more quirky compositions. This would be the first of three tracks he'd provide for them (none of the three were ever issued by Bowie).  "Silver Tree Top School For Boys" was written (but never properly recorded or released) by David Bowie after he read of a marijuana scandal at Lancing College public school, alma mater of Sir Tim Rice (that's a "private school" to us Americans) in the newspaper.  In hindsight one questions the wisdom of Pitt having his charges release a Bowie track that had not only been previously released by another artist (The Slender Plenty in September 1967 on Polydor 56189) but had not resulted in any attention.

It's still amazing.  It starts out with some nice throbby bass (care of future Only One Alan Mair) and has catchy feel not unlike a jaunty Kink's '66-'67 sing-along type number (no doubt thanks to the liberal does of "la la la's" in the chorus). The melody of the track has always bben infectious for me and I find myself humming it very often. "Sugar Chocolate Machine", a group original, is an interesting number as it's got some weird hooks.  It flits between being a soulful number but quirky enough to cop a pop-psych tag as well (with some almost raga-esque guitar in the middle and weird piano with some odd effects at the fade out).  The lyrics are pretty way out as well! 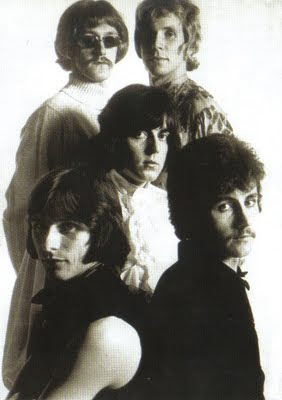 MANY thanks are due to Lenny Helsing's liner notes on the Beatstalker's CD  "Scotland's #1 Group", without which this article would not be possible!
By Wilthomer - July 21, 2011

Email ThisBlogThis!Share to TwitterShare to FacebookShare to Pinterest
Labels: The Beatstalkers David Bowie

This is a great song, I can really hear Bowie in the Beatstalkers cover. I wonder why he never recorded it himself. Very catchy song, great lyrics.

This is a great song. I can hear Bowie in the Beatstalkers cover. I wonder why he never recorded it himself. Great lyrics - as you say a bit like the Kinks.