Few Small Faces songs recorded by other artists have generated Holy Grail style interest among fans like this track released in the U.K. in  January 1968.  There has long been talk that a Small Faces version existed and a recent S.F's/Steve Marriott article in "Uncut" hints that it may exist and if it does it will be a part of an upcoming S.F's box set.  One is left to ponder that since the band played on the P.P. Arnold version is it the same song with just Marriott's vocals in place of P.P.'s?  We are left to wonder.... 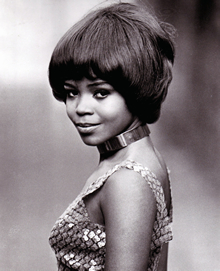 For those not aware of Miss Arnold she was an American singer who came to London as an Ikette for Ike and Tina's place on the '66 U.K. Stones tour and presumably tired of Ike's bullshit decamped to the U.K. when the tour ended where Andrew Loog Oldham, ever the not so clever "I'll make you a star" type for a pretty face, got her signed as a solo artist to his then fledgling Immediate records roster. This was the 4th of her 8 singles for the label. Despite the heavy promotion and assistance from the mighty midgets the single was for all intents and purposes, sadly, a commercial flop. Regardless it's my favorite track by her, whether that's because of the Small Faces connection I'm not sure but suffice to say that beyond her great voice the amazing engine of Ronnie Lane (bass) and Kenny Jones (drums) driving the whole thing make it for me, especially Ronnie's murky Framus bass line. The amount of production that went into it ( by Messers Marriott and Lane), like nearly all the great Immediate releases, is top shelf. The B-side "Though It Hurts Me Badly", though not nearly as good as the top side is still pretty good. It's actually vocally more soulful and musically sounds much later than 1968 and has a distinct 70's feel to it for me, I think the chord changes remind me a lot of Carole King's "It's Too Late" so maybe that's why I'm feeling that. It was written by P.P. and produced by Mick Jagger!

For decades there has been talk of a Small Faces version of "(If You Think You're) Groovy" but it has yet to surface leading me to suspect that all along the mention of it's existence was a myth.  The fact that the exhaustive search world wide for Immediate era material for the band's Immediate era box set "Here Comes The Nice" failed to produce anything seems to justify this theory.


Hear "Though It Hurts Me Badly":

Such a fab tune - gosh I'd love to hear the Small Faces doing it!

Doesn't Rod the Mod look like Paul Weller in that picture?

Also, I wonder what the story is behind that 12/31/1968 French TV show? I've seen clips w/Francoise Hardy & The Who from that same show.

I thought the same thing too, uncanny ain't it? The Small Faces are on that show too, there's footage of them miming "Ogden's Nut Gone Flake" w/ Moon sitting behind Kenny Jones pretending to play drums!