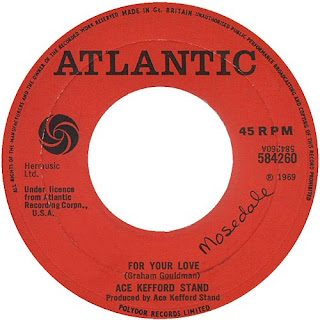 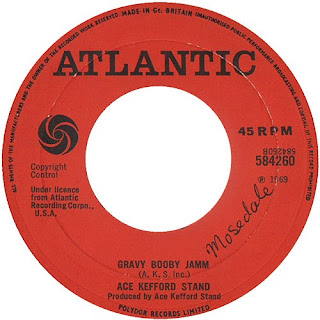 THE ACE KEFFORD STAND-For Your Love/Gravy Booby Jam U.K. Atlantic 584260 1969
Here at Anorak Thing one of our all time heroes is the cool as *uck looking, blonde haired, sharp dressing, soulful singing, fancy footed killer bass playing gent known as Chris "Ace" Kefford. Starting out with Move lead vocalist Carl Wayne in Carl Wayne & The Vikings the two joined forces with other Brummie musicians to form The Move (see August 13, 2009 entry). By the time of The Move's fourth U.K. top ten "Fire Brigade" in March 1968 Ace was experiencing what we would call a complete mental breakdown from drugs, the pressures of rock n' roll and being in a band where he did not get along. It was quoted in several article and interviews that Ace (in the words of Carl Wayne to Brian Matthews on a BBC session) "never got along with the others". It was also stated in a more recent Roy Wood interview that rhythm guitarist Trevor Burton "hated Ace". By April 1968 he was out of the band (not before writing "William Chalker's Time Machine" for fellow Brummie's The Lemon Tree, Parlophone R 5671 which was produced by Amen Corner's Andy Fairweather-Low and Ace's nemesis in The Move, Trevor Burton). His place on bass was taken, ironically, by Trevor Burton, who to this day still performs with drummer Bev Bevan as The Move. 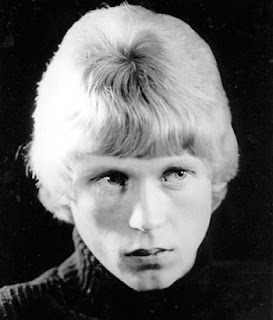 Ace Kefford 1966
Ace wasted little time getting back in the game, which is surprising given his mental state at the time. But he was back in the studio with help of the Move's arranger Tony Visconti working on an LP (which would not see the light of day until 2003) which he eventually abandoned. In 1969 he put together The Ace Kefford Stand with himself fronting the band and Dave Ball-guitar, brother Dennis Ball-bass and Cozy Powell-drums. In March of 1969 the band made their debut with what would be their one off single on Atlantic.
Forget The Yardbird's version of "For Your Love".  The Stand's version bears little resemblance to it.  It's lethargic, a bit drawn out at just under 6 minutes long and Ace's Stevie Winwood-eque soulful voice sounds a bit strained at times.  The whole thing reminds me if the way the Vanilla Fudge bludgeoned "You Keep Me Hangin' On", in fact it would seem that the later is sort of a blueprint for this. But it's the B-side we're here for folks.  "Gravy Booby Jam" (originally titled "Groovy Booby Jam") is without a doubt one of the most sincere British 60's Hendrix tributes/pastiches around.  Ace and Trevor Burton sported some frightening perms in '67-'68 and The Move had toured the U.K. on an insane late '67 package tour with Hendrix (and Amen Corner, The Nice, The Pink Floyd, The Eire Apparent and The Outer Limits, how's that for a kick ass bill!).  Ace was, like many U.K. musicians at the time, was suitably impressed by the Man from Cafe Wha.  The wah-wah infused dirge that is "Gravy Booby Jam" is a masterpiece.  It's pretty heavy but not too over the top and Ace's voice is in top form on this one, buried amidst the wash of funky jamming (the guitar solo reminds me a lot of Mick Ronson's solo on David Bowie's "Width Of A Circle" which would appear the following year, coincidence?).  Ace at several points sings "I've lost my head again...", eerie as mental illness and drug abuse would rear their ugly faces in his life and spell the end of his musical career not too long after this single.  Predictably the record went nowhere and the Ace Kefford Stand were no more.  Ace had one more single up his sleeve in the form of Big Bertha featuring Ace Kefford who released "This World's An Apple"(written by John Bromley) b/w the previously released "Gravy Booby Jam" on (U.K.) Atlantic 584298 which hit the streets in October 1969 before Ace vanished into the underworld of drugs, depression and suicide attempts.  Luckily Ace cleaned himself up by the early 90's and is still with us today. 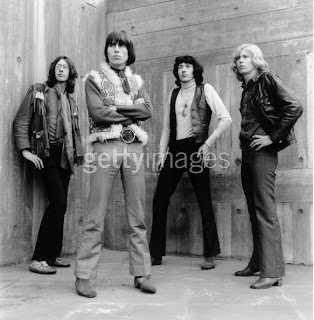 Apparently Ace was one of Black Sabbath's heroes and was mooted as replacement for Ozzy the first time he left! (and of course Cozy did join them later on).
I'd bet money that Tony Iommi had a copy of this sigle.

According to Ace Kefford in an interview he did in "Record Collector" the Sabbath guys saw him and his mini skirted gf climb out of a Rolls and into their Mini in Brum while they were at a bus stop and they were in awe and later tried to seek him out.

i love their version of "all your love" because they bludgeon just like vanilla fudge would.