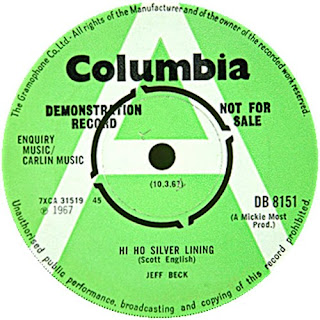 JEFF BECK-Hi Ho Silver Lining/Beck's Bollero U.K. Columbia DB 8151 1967
I find it interesting that upon leaving The Yardbirds in November 1966 (after a brief period where the band was graced with both Beck AND Jimmy Page) Jeff Beck was scooped up as a solo performer by Micky Most who sought to groom him as a pop star. It is somewhat ironic that he would soon attempt the same on the Yardbirds flagging U.K. career less than a year later.
In March 1967 the U.K. was treated to the debut "solo" single by Jeff Beck "Hi Ho Silver Lining" (simultaneously a version by The Attack was issued on Decca F.12578).  It's an interesting departure because, well it's a pop song with orchestration, not something you'd expect from an Elmore James disciple!!  It works, not because of Beck's semi flat vocals but from the orchestration and his nifty little trademark distorted solo.  The flip is the stuff of legends.  Recorded while Beck was still a Yardbird it's an adaptation of Ravel's classical piece "Bolero" with Jimmy page on guitar, John Paul Jones on bass, Nicky Hopkins on piano and Keith Moon on drums.  While it was no secret that Moon was on drums his presence was kept under wraps as he was under contractual obligations to Robert Stigwood's Reaction label as a member of The Who at the time.  The number is one of those crystalized moments of Sixtie's brilliance where what starts off as just a few players having a laugh in the studio becomes legendary when the product is delivered.  Everyone involved gets their chance to shine and Moon goes absolutely batsh*t during the "rave up". "Hi Ho Silver Lining" gave Beck his first Top Ten "solo" hit and the flip was a precursor to many more "superstar" arrangements, namely The Jeff Beck Group, formed less than a year later. 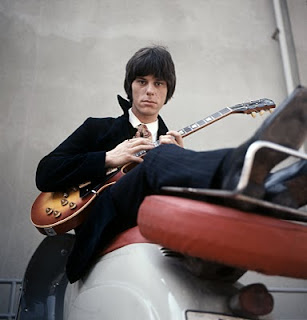 Jeff Beck, scooterboy?
Both sides were collected on his CD collection "Shape of Things: 60's Groups & Sessions".
By Wilthomer - November 16, 2010

Have you heard The Attack's version - worth having for the collection..

Slowly catching up your site from the last couple of weeks (love your old power-pop stories), but I just had to call out that amazing Jeff Beck photo.

I have indeed Mondo, I like them both I think! I'd like The Attack's vocals w/ Beck's musical backing!