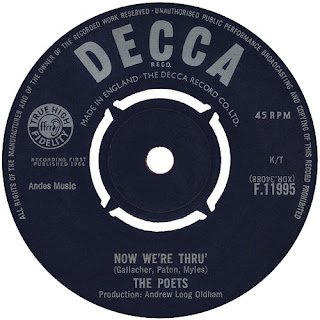 The Poets hailed from Glasgow, Scotland and were the first Scottish "beat" group to make the U.K. Top 40, this single (August 1964). This was their debut single and sadly their only trip into the charts (the single reached #22). This enabled them to appear on all of the major British pop TV shows to plug their hit and even got them filmed for the cutting edge U.S. TV show "Shindig", who routinely filmed British bands in London for use on their show. The single actually even garnered a U.S. release on dynoVox label (dynoVox 201, August 1964). The group went through numerous line up changes throughout their brief six single history (1964-1967) .  The personnel for this 45 were: George Gallacher (vocals), Hume Patton (lead guitar), Tony Miles (rhythm guitar), John Dawnson (bass guitar) and Alan Weir (drums). 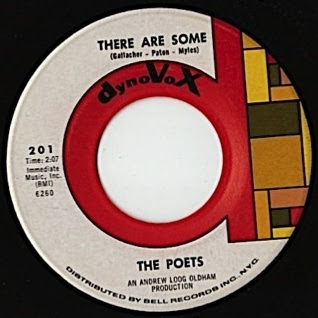 Most 60's beat groups have pretty uninspiring tales of their claims to fame but nobody's can beat that of The Poets. In September 1964 Stones manager Andrew Loog Oldham flew up to Glasgow (how classy of him not to do it by bus, train or Comer van) to marry his 16 year old girlfriend Sheila Klein (16 was not the age of consent in England I'm guessing).  Whilst in the Glasgow airport he spotted a photo of them decked out in the frilly shirts and dark suits with an article in a local paper on The Poets, whom he duly investigated. Loogy signed them up ASAP after audtioning them and brought them down to London to record this smashing debut which he is credited with producing.

"Now We're Thru" first came to my attention in late 1984 or early 1985 when I scored a copy of the amazing Decca double LP comp "Hard Up Heroes" at Bleeker Bob's where it was nestled amongst my other first introductions to the likes of The Birds and Zoot Money.  It struck me immediately with it's monster echo and hypnotic over-amplified acoustic 12 string (courtesy of lead guitarist Hume Patton) and deliberately drawn out pauses on certain words. Lyrically it's an interesting number, like many 60's beat records it's a "boy loses girl" scenario only this time around the boy is actually acquiescing to losing "her" to another and suggesting she move on!  It's also one of the few 60's records that I think benefited from Oldham's studio ineptitude because it's possible that his desire to be Phil Spector and the resulting over use of echo gave this record it's charm.  And it's even a group original written by Gallacher, Patton and Myles, not many 60's beat groups got that option for their debut! The flip side, "There Are Some" isn't very interesting.  It's a slow piece with some piano, not much there really.  The only highpoint of the record are some interesting drum rolls which were actually the work of a session musician! 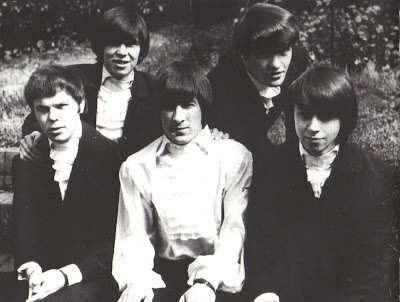 Both sides were also included on the dodgy "In Your Tower" CD comp of their material and the hard to get but much better Poets CD comp "Scotland's No. 1 Group".  Strangely neither track surfaced on any of the Decca/Deram "Scene.." CD compilations. In 2011 both sides were compiled for CD on The Poet's "Wooden Spoon:The Singles 1964-1967" which is, just that (no bonus cuts unlike "Scotland's #1 Beat Group").

Yeah, the Poets...I actually met George and a couple of the others in a Glasgow pub around 1994-95.
I'm sure Lenny will remember better, since I simply went along with him.
The Poets have certainly that kind of magic that's not easy to find.
They recorded almost entirely original songs, and original they were!
I was totally amazed to see that clip from Shindig and been waiting for some other jewel to be dug out...

You probably know, but just in case!! The Poets play 'The Big Stramash' in Edinburgh July 2011.