With 31 years as a "mod" under my belt I think I can now survey my life and state, unequivocally, that "My Generation" is quite possibly the greatest mod anthem of all time. Sadly I cannot recall when this number first came into my life precisely.  I have vague recollections of seeing a clip on a British invasion segment on a 60's music  TV special with the band miming the number to bored London spectators and hearing the track on the radio during the moments before I took the leap from a " British invasion"/60's music fan to "mod".  With  my introduction to The Jam and "mod" in 1980 The Who were next in my logical process.  My high school library featured a large coffee table book called "The Sixties" with a chapter on mods written by Pete Townshend that featured a large two page black and white photo of some parka wearing mods on scooters bedecked with mirrors.  There was also a full page photo of Townshend in a plaid shirt playing a Rickenbacker in front of a large amp draped with a Union Jack (both of which, with the aid of a razor blade became part of the art in the hallway outside my teenage attic bedroom door). I do recall, however the great joy upon purchasing an American double LP that coupled the U.S. 1965 LP "The Who Sings My Generation" coupled with the U.S. only 1968 LP "Magic Bus" on MCA records and taking it home and playing it for the first time soon thereafter. My life was literally changed.  And though I was perhaps too young and naive to yet be cognisant of railing against the authority or my elders I was terribly misunderstood by my backwards, ignorant small minded peers at school.  That in itself made "My Generation" a perfect middle finger for the people around me who found my French crewcut, Desert boots and narrow ties alien and worthy of abuse. 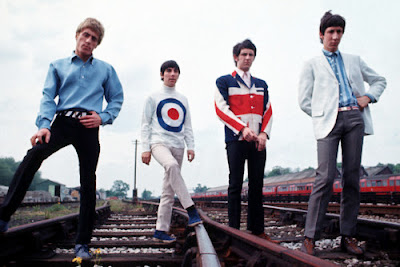 "My Generation" was for many years, a sort of disgrace for me, because as a young arrogant bastard I carried a grudge against The Who because they became everything they railed about:the establishment, the old.  It also became an anathema to me because too many times in my 20's and 30's I'd witnessed younger (or even my age) poseurs or "instant mods" (the sort who were 'mad for mod" for a few months before moving onto the next fad) jumping around to it acting like assholes in a club, almost as disgusting and juvenile  as the stupid "We are the mods" chant.  In my period as a DJ I never once played the record for that reason alone.  As I approach my semi-centinial I find myself able to transcend all of that and once again enjoy the crash bang wallop that is "My Generation"..  Regardless of the lyrics it's still an amazing record musically. What's not to love about Daltrey's arrogant deliberate stuttering, Moon's utterly ridiculous ill timed drum rolls, Entwistle's seamless bass solo and Townshend's repetitive main riff with near country style licks that twang in and his eventual coaxing of Morse code from his Rickenbacker against a wall of classic feedback cacophony?

In the U.K. the flip was "Shout And Shimmy", a number that I enjoyed back in the day thanks to bootleg LP's that collected the band's B-sides.  These days I'm pretty ambivalent about their cod-soul numbers like this one that might have been fun for them to play live but didn't do much for me.  Here in the States we were instead treated to "Out In The Street" as the flip side, which on some copies (mine included) was titled "Out In The Street (You're Going To Know Me)"!

I remember that book about the Sixties you were talking about. I believe it was published by Rolling Stone in the late '70s. We also had it in our high school library (there were no Mods in the Witch City in '79; there were plenty of those other people you described in my high school, unfortuntely)

I also have that Shindig clip as part of that Purple Hearts & Power Chords DVD set. It's rather interesting, especially the beginning, which is different & sorta reflects Pete Townshend's initial vision of a talking blues style song.

Aw man, I remember my first time hearing this exactly! I was about 14 years old and had been drilling my dad on any info he had on Mods. He turned me off, though, when he told me that the Who were a Mod band. "What? But they're in the Guiness Book of World Records as the loudest ROCK band and they look like hippies!"

One day I was with my uncle in his room as he was playing me various sixties songs from his Time Life collections. I was getting bored... until he played a punk song. I couldn't believe my UNCLE was playing this for me? "Who's THIS?" "That's 'My Generation' by The Who. Your dad told me you were asking about them."

Loving the anthems posts. With 26 years of my own modness under my belt these kind of posts always hit a chord with me. While I remember being introduced to My Generation in the summer of 1981, the game changer for me was next discovering Quadrophenia and playing the record and cassette daily for about a dozen years after that. Still play that quite a bit in fact. It's simply sublime.

Keep up the good work on the blog.

Cheers to all of you, it's folks like you that keep me typing away!

Well said. It's curious how some attitudes to some records go full circle. Loved this as part of my mod starter pack, then kinda became embarrassed by it, now appreciate it as simply a flippin' amazing record.